In Psalm 32 we get this intimate glimpse of a part of David’s spiritual journey. What David describes in this psalm is not an outlined doctrinal dissertation, which point by point lays out the theological distinctives in a very systematic structure of how God forgives us.

Instead, David relays to us something of incredible importance by talking about his connection to God. King David, this mighty warrior, a man’s man, vulnerably lays out the ups and downs of his relationship with God. In any relationship where us humans are involved that’s what you’re going to get; ups and downs; highs and lows, good days and bad days, days of doubt and days of certainty.

Think about a special relationship in your life. Not all days are the same. There are days where you’re on a mountain-top high, when there seems to be nothing but connection, trust, joy and assurance, but then something ugly rears its head causing division, separation, doubt, turmoil, guilt, uncertainty, day and nights of darkness.

We see all this in David’s awesome description of his journey with God.

David wrote, When I kept silent my bones wasted away through my groaning all day long…your hand was heavy on me; my strength was sapped. These are low days when David must have wondered if there is any remaining connection.

But then in the same psalm David says, You are my hiding place, you will protect me from trouble and surround me with songs of deliverance. Rejoice in the Lord and be glad…sing, all you who are upright in heart.

So what was going on in David’s life that brought this oscillation into his connection to God? We’re not exactly sure what the occasion was when David wrote this, but most people assume it revolves around David’s affair with Bathsheba.

David should have been with his army which was in battle. David was a warrior king and so it seems strange that he was not his army. For some reason he made the decision to separate himself from his fellow soldiers. And so he found himself in the comfort of his palace.

No, this is not a story of Harvey Weinstein or the countless other men in our days who used their power, position and authority toward the same end.

Bathsheba conceived a child and there was no way to hide who was the father because her husband, Uriah, one of David’s best warriors was in battle. David calls Uriah to his palace hoping that he would use the trip to be with his wife. But Uriah refuses stating that he could never do so while his band of brothers were in battle. David eventually arranges for Uriah to be killed in battle.

How did life spin so wildly out of control? David must have wondered in dismay…how did this happen? How did life move from a glance to a murderer?

God loved King David too much to leave him feeling good about that which separated them. And so God placed his heavy hand on David. That’s when David wrote: When I refused to confess my sin, my body wasted away, and I groaned all day long. Day and night your hand of discipline was heavy on me. My strength evaporated like water in the summer heat.

When I was in grade school I was that kid who could never sit still. I remember my 5th and 6th Grade teacher, Mrs. Varney, would often walk over to my desk and from behind, gently but firmly place her hand on my shoulder. The weight of her hand on my shoulder told me of her presence and reminded me that whatever it was I was doing was not OK.

That’s what God did to David and that’s what God does with us in our spiritual journeys. God loves you & me too much to leave us comfortable in that which separates us from Him. And so he places his hand on us, not looking to crush us, but to lead us.

Now I know that guilt has a bad rap. Erma Bombeck said “Guilt is the gift that keeps on giving.” I get it. No one likes guilt, but this psalm seems to say God uses it to lead us away from that which destroys our God connection. Guilt can either paralyze or catalyze.

David was catalyzed into action. David wrote: Ps. 32:5, Then I acknowledged my sin to you and did not cover up my iniquity. I said, “I will confess my transgressions to the Lord.” And you forgave the guilt of my sin.

1 John 1:8-9 tells us this, If we claim we have no sin, we are only fooling ourselves and not living in the truth. But if we confess our sins to him, he is faithful and just to forgive us our sins and to cleanse us from all wickedness.

From within the stronghold of forgiveness, King David says, Yes, what joy for those whose record the Lord has cleared of guilt, whose lives are lived in complete honesty! David goes on to say, For you are my hiding place; you protect me from trouble. You surround me with songs of victory.

An important part of any journey is learning and that’s where God led King David.
Psalm 32:8, I will instruct you and teach you in the way you should go; I will counsel you with my loving eye on you. Learning while in the journey is critical.

Learning is a part of our journey with God. God’s forgiveness gives us a clean slate from which we learn and move on in life. God instructs us, leads us and guides us. How does he do that? One of the clearest ways he guides us is through this, the Bible. I read the Bible on my own. I listen to good Bible teachers on the radio. I attend a Bible class at church. I join a small group that meets in someone home and we study the Bible together. God works through all of these means.

Where does all this lead us? King David answers that in his final sentences of this psalm.
Psalm 32:11, Rejoice in the Lord and be glad, you righteous; sing, all you who are upright in heart! 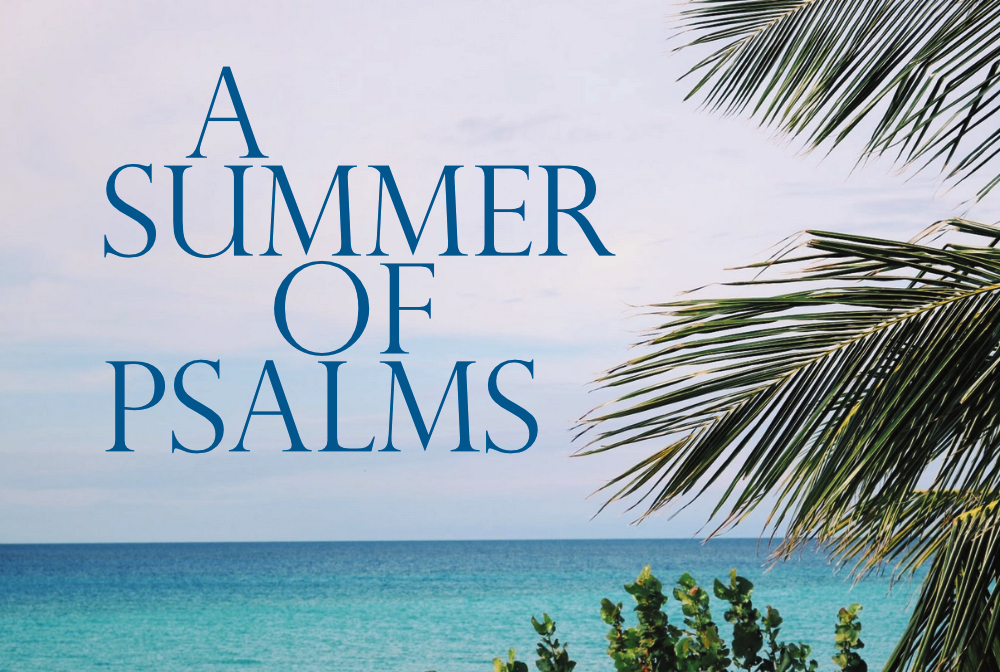 More in Summer of Psalms